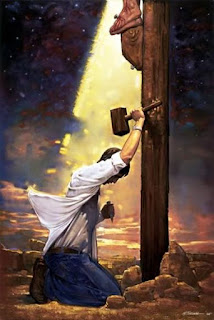 A Large number of people destroy their lives because they are tired, discouraged, depressed or nervous. They do not have hope. They feel their problem cannot be resolved. But let me tell you friends that there is no such problem which can not be resolved. One of my friends was in a great debt, but since he did not loose hope, now he is good. God wants us to be joyful in hope (Romans 12:12) and keep trying. He has plans for us and plans of prosperity (Jer.29:11). People who trusted on him, relied on His plans and agreed to His plans got success in their lives. Jer 29:11 clearly tells us that God has plans for each one of us.... Yes, He thinks. He is …. , He is alive. He cares for us and that is why He thinks about us.

At the time Noah, when everyone was corrupted Gen 6:5-7 tell us that the wickedness of man was great in the earth, and that every intent of the thoughts of his heart was only evil continually. But there was Noah who was righteous in the sight of God. So God made a plan to destroy all the flesh. But God had a Plan for Noah and He has a plan for us. He thinks. God made a plan to save Noah and his family from the great flood. And we all know what happened, how God saved their lives in the amazing way because Noah agreed with His Plan. He happily received His plan and not rebelled. He got blessings and life because he relied on His plan.

When we were sinners, God thought about us and planned to save us. His plan was and is so good. I should say an excellent plan, and we find it in John 3:16. Yes, He sent His only son, and whosoever believes will not perish but will have everlasting life. He sent Jesus to this earth in the form of a simple Human being as a Ransom for all. Yes, Jesus came to this earth lived a simple life, a blameless life, but still He was crucified. He shed His blood for our Sins; He was on the cross for us. He died and was also buried. But He came out of that grave on the third day and became victorious over death. Yes, He resurrected and He is alive!!! He will come back and we will be with Him forever. Amen

Wow what a plan....!!! He plans for us. He thinks about you and me!!
He has Plans of Shalom for us.....
He is Jehovah Jireh...Who provides. Trust Him, He will provide all your needs. He will never let you down.

A lot of times we do not accept His Plan e.g.-
I want to marry that girl... only that girl. I want that Job...only that job. I just want it...etc
And do not care to know the Will of God.
When we do not receive His plans in our life, He accepts it like a simple Daddy. When a kid asks his dad for a knife, his dad explains and tries to give something else which is good for kid. But when kid insists too much, dad simply changes himself and agrees with the kid. And you know Kid gets hurt by that knife... this is what happens when we do not agree with the Plan of God like a person who insists to marry particular girl...,Yes he gets that girl but after a short while...he feels if he would have married somebody else…

Therefore, the best thing for us is to Joyfully Rely on His Plans, Receive His Plans, and do not Rebel.

If you are touched and you want to support our work, you can click below:

Posted by Minister Karan at 6:57 AM 2 comments:

What is the most Important thing that a person must guard?

Have you ever thought what is the most important thing that we should guard? "The time is coming," declares the LORD, "when ...